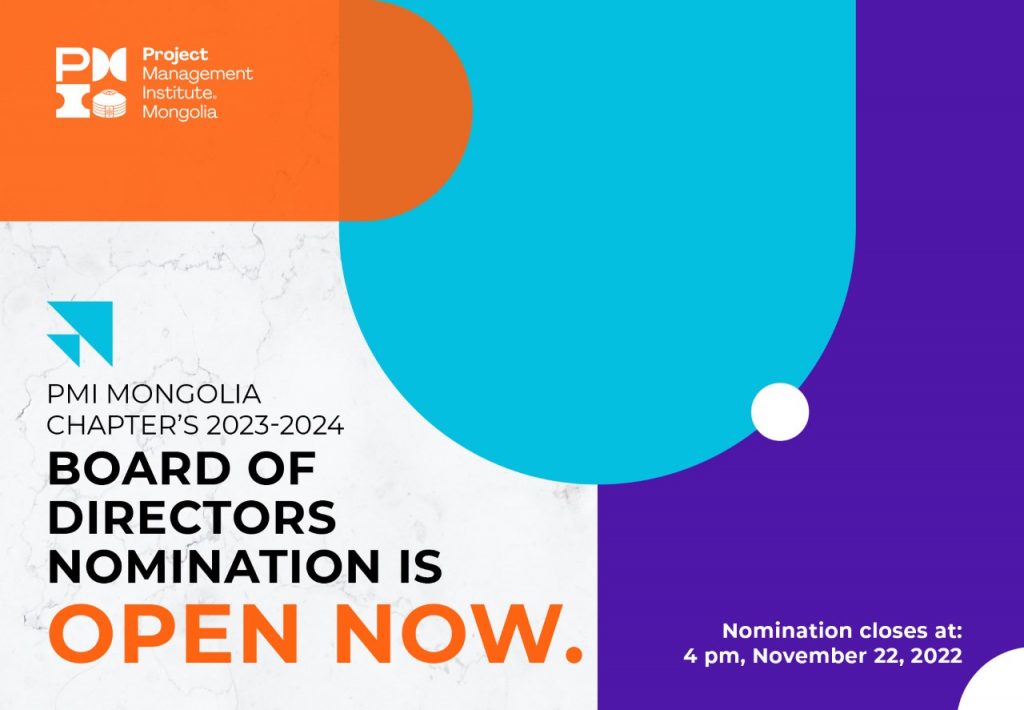 Nominations for (PMI)® Mongolia Chapter’s 2023-2024 Board of Directors election are now open!

Do you know someone whose expertise and values should be represented on (PMI®MC)’s Board?

Would you personally like to play a leadership role in (PMI®MC)?

Service on (PMI®MC)’s Board of Directors represents a major contribution to country’s project management industry development. Nominations are encouraged on behalf of and directly from (PMI®MC) members interested in serving in a volunteer leadership position. Self-nominations require an endorsement from two current (PMI®MC) members (to be included on the nomination form).

Vacant positions for a contested election:

Please submit a nomination form(s), letter of intent in English, updated CV in English, and other supporting documents by email to administration@pmimongolia.mn by 16:00 November 22, 2022.

The call for nominations starts on November 7, 2022, and closes at 16:00 on November 22, 2022. The election will begin on December 5, 2022, and e-ballot voting will be closed on December 9, 2022. The election will be conducted and observed by an independent Election Nomination Committee approved by the Board. Following the nomination deadline, (PMI®MC) Election Nomination Committee will review all applications and solicit additional recommendations as needed to form a list of qualified candidates for each position. The committee will rank candidates for each position and candidates on the short list will be contacted by the representative of the Election Nomination Committee for an interview to confirm their interest in running for election and their understanding of the specific duties and responsibilities required for service. Current PMI Mongolia Chapter’s Board of Directors may participate in the interview phase. Candidates selected for the final slate will be asked to provide brief responses to several questions to help voting members understand each candidate’s goals and priorities for their term of service.

Important points to note regarding nominations and voting: